Paris and the Time Traveling Tourist

I was cleaning out a closet this weekend, when I rediscovered a scrapbook I made after my first trip to Europe. It was 1984, the summer between my junior and senior year of high school, and I had been a member of a American-Canadian orchestra that toured Europe – six countries in two weeks. Traveling from my farm in rural North Dakota to Holland, Germany, Lichtenstein, France, Switzerland and Belgium remains the most mind-opening two weeks of my life. “How are you going to keep them back on the farm after they’ve seen Paris?” indeed.

As our group traveled through Europe, I bought trinkets for my family and friends, and I saved every single shopping bag and even paper placemats from fast-food joints. The different languages, styles of graphic design and fonts all fascinated me – everything from Europe looked different, and different was good.

Paris was the city that made the biggest impression on me during that whirlwind tour. We of course visited the major Paris landmarks, including the Champs-Elysees. In the small bit of free time that I had, I bought an aqua, loose-fitting, squarish summer jacket, and a pair of leather charcoal gray oxford shoes that I adored (and unfortunately grew out of by the following summer). Both were designed and made in Paris.

Unfortunately, the days when a seventeen-year old farm girl could go to Paris and come home with a French-made jacket and pair of shoes from the Champs-Elysées have passed.

“The Champs-Elysées, a Mall of America” was the headline of a New York Times story by Steve Erlanger on how there is little French culture or couture on the Champs-Elysées amongst the international brands that have taken over the grand boulevard such as The Gap, Tommy Hilfiger, H & M, Tiffany & Co., Nike, Abercrombie & Fitch.

Sociologist George Ritzer uses the phrase the Mcdonaldization of Society to describe how the production and consumption “efficiencies” of the fast food industry have spread throughout other types of industries (apparel being one of them). One of the key downsides of globalized McDonaldization is cultural homogenization, something the French have fought in other areas of culture such as food and language.  But the Champs-Elysées is apparently a casualty, taking on some of the homogenized characteristics of what James Howard Kunstler referred to as a “Geography of Nowhere;” urban spaces where the same brand-name stores occupy the main commercial districts, giving what could be distinctive places a look of sameness.

Of course, Paris’s architecture saves the Champs-Elysées from the banal soul-lessness of Kunstler’s suburban geography of nowhere.  According to a Franco-American joint research project, “What Makes Paris Look Like Paris?” the look of Paris is unique, its urban planning grammar recognizable to almost anyone, even when simply viewing random images from Paris streets that do not contain its iconic landmarks.

While we should all rejoice that Paris still looks like Paris, I do regret that the interiors – the shop floors – no longer look like Paris, but, as the headline said, like the Mall of America.  French-made apparel still exists. Mephisto still produces shoes in France, and there are small boutiques that feature French designers whose garments are custom-made (though such boutiques are not on the Champs-Elysées). Unfortunately, I can only look, not buy, since a purchase would be a major investment.

My interest in vintage clothing was also cultivated during that 1984 tour of Europe. I remember an Amsterdam outdoor clothing market that had a mix of old and new clothing (possibly the Waterlooplein Market). I bought a secondhand short wool Dutch Army jacket that I thought looked quite smart.

The flea markets and the secondhand shops have been my shopping destinations abroad for years now, although unfortunately, even open-air flea markets now hawk more new, cheap, China-made garments than secondhand.

Nonetheless, the secondhand spaces are the only places where I feel like I have a chance of finding apparel that is local, and where I can possibly come across something unique that I possibly could not find at home.

It is telling –  today I not only travel to a different country, but I must time travel in order to bring back a souvenir that is made in France.

Filed under Fashion and the City, Vintage Clothing 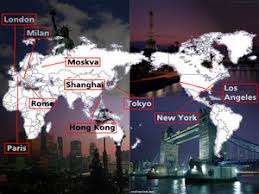