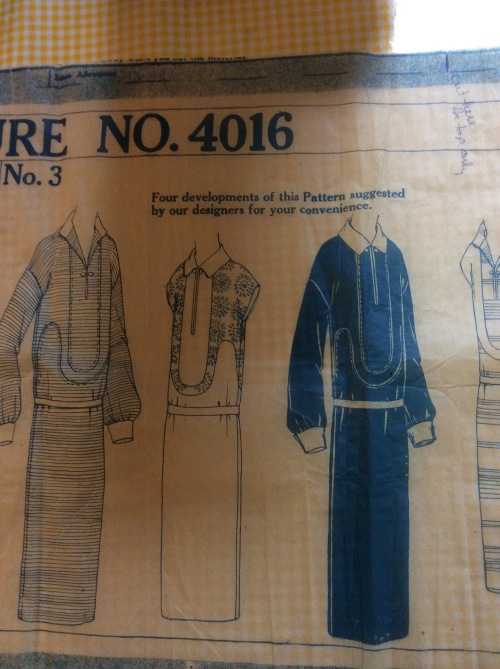 In my last post, I was stalled by indecision of how to proceed in making a 1920s day dress. I had a 1921 McCall’s pattern and a 1920s hat. But did my authentic vintage pattern look “20s enough” with its straight skirt rather than the pleats or flounces I associate with the decade? I booked my tickets to the Jazz Age Lawn party, and excitedly (and somewhat nervously) wondered what to sew.

My imaginings for making the 20s dress took me through hundreds of google images and  e-bay listings of 20s dresses and 1920s pattern catalogues. I noticed how the hemlines rose and fell during the decade. I observed accessories and that the iconic 20s cloche was not the only hat style of the time. And despite e-bay listings that combine two decades with “20s/30s dress,” I could clearly see the rather dramatic shift  from Twenties’ loose pull-over-the-head dresses to Thirties’ highly fitted dresses (enabled by a new trend of using zippers in dresses). I also learned more about my favorite fashion decade, the 1960s. I knew that Sixties’ styles were influenced by a 1920s revival, but looking through the Twenties designs I was still a bit surprised by how closely the two decades relate – simply take a Sixties drop-waist scooter dress, leave out the darts and make it out of a light, floaty fabric, and you have a 1920s flapper look. I contemplated working with one of my 1960s patterns instead. 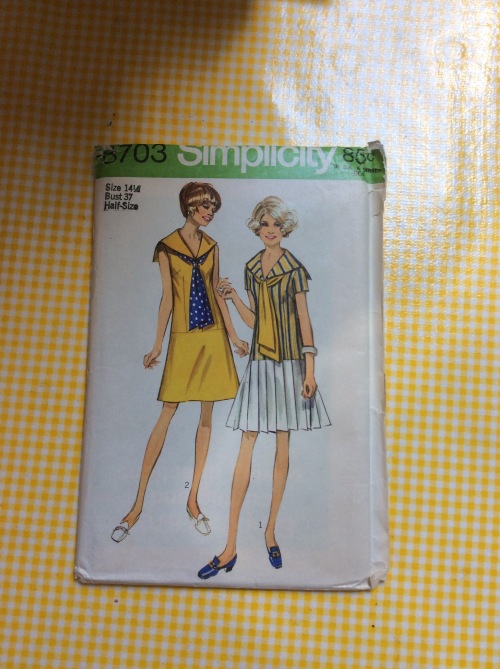 Yet in the end, I sewed my 1921 McCalls pattern rather than a Sixties-does-Twenties flapper dress. I even kept the straight skirt design of the original pattern. However, beyond that, making the entire 20s lawn party look was an exercise in “Twenties-ish” improvisation. In sewing the dress pattern, I drew on imagery from different years within the decade rather than hewing strictly to 1921.  I lowered the skirt hem below the knee. Below-the-knee skirts were in style in 1924, so it was as if I was a 1920s seamstress who procrastinated three years to make her dress, and altered the hem accordingly. I added a pocket to fill out the deco curve. And I made a two-piece dress (a top and matching skirt) rather than a one-piece. While I did see a few matching tops and skirts in my 20s image search, they seemed like exceptions. That decision was an example of how the needs of the present shape how we represent the past – I need clothes I can mix and match rather than a 1920s dress that can only be worn to costume events, and the two-piece style gives me that option. 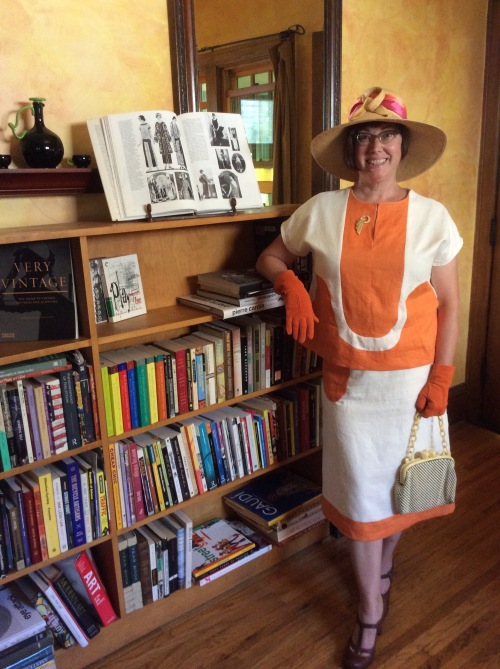 In terms of accessories,  I went with a wide-brimmed straw hat rather than my authentic velvet brown 20s cloche, which seemed too heavy for August. In completing the look, I simply thought “Art Deco.”  I associate my Whiting & Davis white mesh bag as deco style, but according to the label and the Vintage Fashion Guild, it’s a 1940s, not a 1920s. The bag matches a deco celluloid-and-rhinestone pin, and the pin in turn matches the straw decoration on the hat. Are they 20s? I don’t know. The t-strap shoes are four or five years old but look 20s-ish. The orange gloves? Who knows? And I don’t have an option other than my 1950s/1960s cat-eye glasses. I like the vintage look of the whole ensemble, but it’s not authentically 1920s. Will it pass as Twenties? We’ll see.

Picture a 1920s dress and hat, trying to imagine the style, fabric and color.

What comes to mind as you picture the dress? Does it have a drop-waist? A hemline that stops just below the knee? Is it sleeveless? Is the skirt fitted, gathered or pleated? Does it have a straight hemline or an uneven one?  Is the dress fabric you’re picturing rather light-colored (pastels?) and floaty, like silk chiffon? Or maybe black, adorned with beads or embroidery?

Where did your image of the 1920s dress and hat come from? Did you draw from images from the film The Great Gatsby (and then, 1974 or the 2013 version?) or maybe the HBO series Boardwalk Empire?

Did the dress and hat you imagined look anything like this? 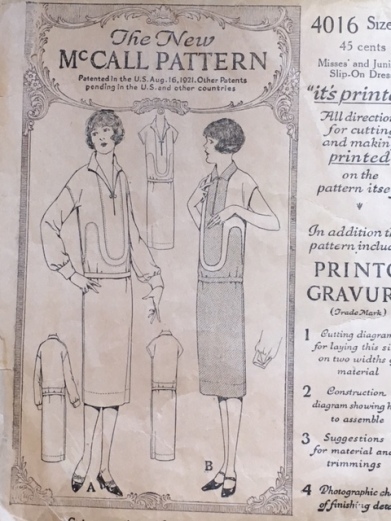 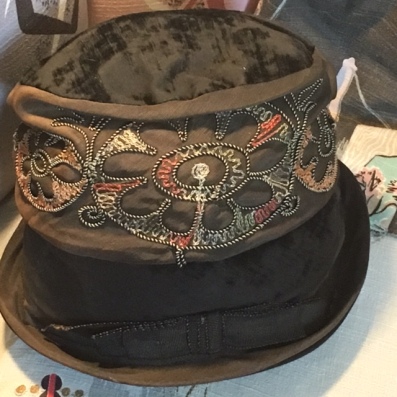 I’d like to have something to wear to a 1920s-themed event, like the Jazz Age Lawn Party or to a speakeasy bar.

The pattern pictured above is a genuine 1921 pattern. The hat is a 1920s hat that I’ve had for years, displayed in my sewing room in a clear hat box. I’ve purchased linen fabric in the yellow-cream and light orange that matches the hat’s embroidery.

Yet I find myself hesitating to cut out the pattern pieces. I keep thinking, “Does the pattern really look 20s enough? I mean, aren’t those exaggerated wavy lines in the design more mod 1960s or 1970s than 1920s? And what about that skirt on the dress? Doesn’t it read more 1930s? And isn’t the skirt kind of frumpy? Does the hat look enough like a cloche?”

And here I am caught up in the irony of having genuine 1920s articles, and wondering if they look “authentically” 1920s.  I’ve been thinking of making the pattern with a different skirt style – maybe pleated or handerkerchief – in order to give it a more “20s look.”

I’ve been reading Heike Jenss’s book Fashioning Memory: Vintage Culture and Youth Style and it’s helped me understand why I’m questioning the “20s-ness” of my pattern. It turns out we have a selective cultural memory of what 1920s (or any past decade’s) style is. My 20s patterns doesn’t look 20s enough because I’m drawing off only the most iconic images of how that era has been reproduced in popular culture in films like Midnight in Paris or the television series Downtown Abbey.  Costume designers regularly allow present styles to influence how they reproduce the past. So, for example, the 2013 version of The Great Gatsby features much more fitted versions of flapper dresses than actually was the style. It’s no surprise – every vintage store owner I’ve ever talked to about wearing 20s  has told me that most women look terrible in the flat-chested, straight-sided, sack-like dresses of that era. But like most vintage enthusiasts, I’m highly influenced by the present in my imagining of what constitutes “the look” of the past. And so, just like a costume designer, I’m highly likely to alter the pattern’s style to give it a more shapely look that I can more easily wear in the present day. And then my altered “authentic” 20s dress will continue to shape how we today imagine the 1920s.